The seeds of Bainbridge Community Foundation (BCF) were planted many decades ago. In the late 1970s, the board of One Call for All (then known as the Bainbridge Foundation) accumulated a number of illiquid assets, among them the note on the Barber Shop on Winslow Way, a piece of land-locked property on Wyatt Way, a stock certificate for one share of General Electric Stock, and shares in American Marine Bank donated by bank founder Lou Goller. Unsure what to do with those assets, in the late 1990’s they appointed Steve Davis and others to their Trust Committee and charged them with formulating a plan.

The committee recruited attorney Larry Mills. With Larry’s expertise, the landlocked property was granted access and sold, paving the way for other assets to be liquidated. The net value of the proceeds amounted to $172,000.

With those funds in hand, their plan was to build a permanent and reliable source of income for area nonprofits when urgent needs arose—a complement to the annual fundraising of One Call for All.

With the blessing of the One Call for All board, the Trust Committee dissolved and established the independent nonprofit, Bainbridge Island Community Endowment -- a chartered grant-making organization that would analyze the needs of our community, prioritize and address those needs, and anticipate how to foster quality of life for island residents in the near and long term. Bainbridge Island Community Endowment was organized under IRS Section 501(c)(3) as a community foundation, though the organization did not adopt the name Bainbridge Community Foundation until 2005, to avoid confusion with the Bainbridge Foundation.

In September 2011, the foundation hired its first executive director and in the next month the foundation became fully independent managing its investments and operations. The next five years would bring about some of the foundation’s largest growth in services, with the addition of the Nonprofit Survey in 2012, a new Capacity Building Grants Program in 2013, and fully professionalized operations. Today, BCF is singularly positioned to understand and address the broad needs of our community and has grown to have $20 million in assets. We are proud to help our community grow and diversify by providing financial and logistical support to Bainbridge Island nonprofits through positive, sustainable, and inclusive investment—funded by citizenry that cares deeply about our shared home and wants to shape constructive impact, whether as major contributors or first-time donors. Together, we are Bainbridge. 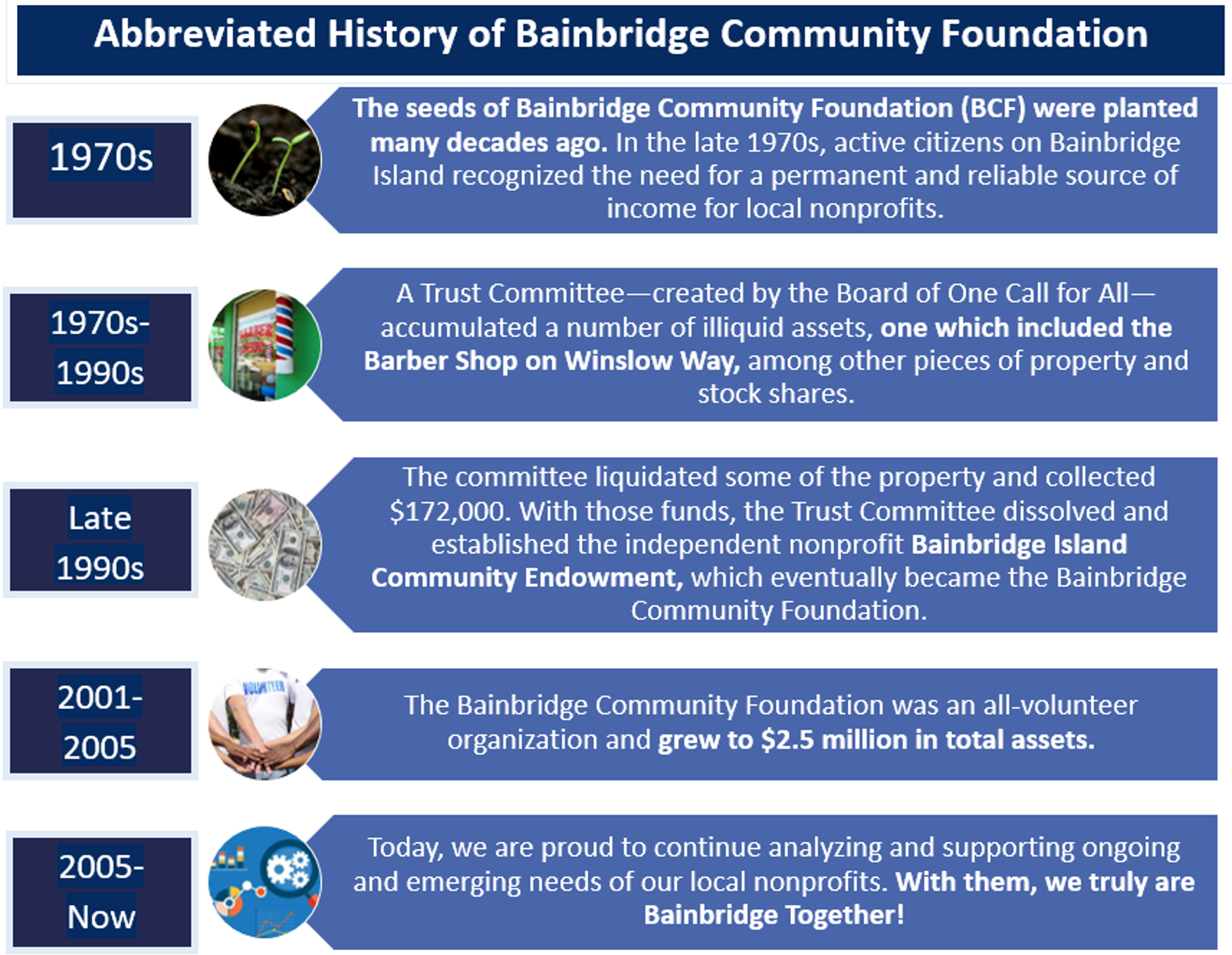 BCF: Then and Now

“Through BCF we have enjoyed learning about our many local nonprofits and the positive roles they play in our lives. We also have seen wonderful examples of generosity on the part of individual citizens, actions that encourage giving by others.”