Keeping Wilderness in the World

When asked what motivates her to do her work, Samantha Zwicker said, “it’s hard to define one reason, but if I had to sum it up, I’d say we want to keep wilderness in the world.” She added that addressing the root cause of an issue is a true motivating factor, and that she hopes her work will someday influence systemic problems that harm wildlife in Peru. 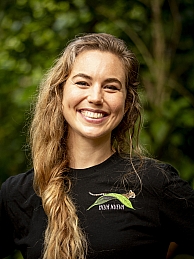 Samantha, who goes by Sam, is a Bainbridge High School graduate. She has already saved the lives of over 250 wild animals in the Amazon and has employed almost a dozen local and international experts to help care for them through her nonprofit Hoja Nueva. The recent release of a documentary called Wildcat, which premiered at theaters on Bainbridge Island the weekend of November 11th and will be available on Amazon Prime at the end of December, captures the beginning stages of her journey. Since the filming of the documentary, Hoja Nueva has grown and matured to be a full Wildlife Rehabilitation Center as well as a research and conservation center located in Madre de Dios, Peru. When “rewilding” the animals they receive, Hoja Nueva has designed a meticulous approach of caring for and nurturing young babies, and then they slowly prepare them to return to the wild. Hoja Nueva also accommodates the varying needs and personalities of younger animals by providing them with specific, tailored skills and tools to survive in the Amazon on their own. Once old enough, they implement minimal-contact protocols to ensure the successful development of the animals’ natural behaviors.

Sam’s drive for rescuing animals began at a young age on Bainbridge Island when her parents used to take in injured cats, ducks, owls, and other creatures to nurture them back to health before releasing them to the wild. In middle and high school, she volunteered at a local domestic animal rescue nonprofit called Furrytale Farm, and said she remembers regularly bringing animals to West Sound Wildlife Shelter. She participated in a locally-driven program called Lengau where Bainbridge High School students travel to South Africa, which sparked her interest in wildlife abroad. As her interest in animals and ecosystems grew, she pursued a bachelor’s degree in zoology and environmental science at University of Washington and spent her free time interning with the Conservation Department of the Woodland Park Zoo. That project, which focused on creating a habitat loss recovery plan for the western pond turtle, combined with a separate project her senior year focused on the restoration of Yesler Swamp, deepened her interest in how environmental health impacts animals.

Four years, one master’s degree in conservation ecology, and multiple grant awards later, Sam found herself building the foundation for what is now Hoja Nueva in 2016. She spent many of those years living with local communities and developing ways to sustainably harvest cocoa, when she came across a lost ocelot. While living in Peru, Sam learned about the poaching of these types of animals for their parts, their fur, or for their appeal in attracting tourism. When she and her partner found the ocelot, they named him Khan and cared for him as their own until he was killed by a man-made shotgun trap at one year old. When a second ocelot came along, who they named Keanu, they trained him to fend for himself in the jungle. They tried to ensure he was in a safer, more remote surrounding so he would be less likely to run into humans.

Over the next several years, Hoja Nueva was developed into its current form. It has a mission of protecting and fortifying Amazonian biodiversity in Madre de Dios, Peru through conserving intact ecosystems, confronting threats to wildlife, implementing biological research, and conducting environmental education. Sam has not taken this mission lightly, and is currently finishing her PhD in Quantitative Ecology at the University of Washington. With this degree, she hopes to be able to apply for more grants and grow Hoja Nueva into a self-sustaining organization where scientists can travel to Madre de Dios and learn about the balance between wildlife and ecosystems. Her vision is to have the infrastructure—both a physical and intellectual space—for students to conduct research and learn in this unique environment. She plans to provide scholarships for local women, who traditionally have not had support to pursue this type of education.

Sam was recently visiting the Island for the film’s release where she was able to introduce more people to the work of Hoja Nueva. A couple with a donor advised fund at BCF was so inspired by her story that they decided to donate $50,000 to Hoja Nueva. The grant will be used to help build the facilities needed for expanding the program in Peru.

When asked what keeps her striving for more, Sam answered “it’s being contacted about another animal we can save. But in addition, while saving individual animals feels wonderful, we also want to address the root cause of the issue. How can we help departments in Peru know where to put animals that have been seized? How can we create change in the actual trade and trafficking of wildlife, nationally or globally?” Sam hopes to raise awareness about sustainable, responsible tourism in the Amazon and educate people about how our actions impact the local wild life and ecosystem.

Keeping Wilderness in the World
November 22, 2022